As a community who loves the game and want it to continue to grow and be successful in the USA, it is our combined responsibility to adhere to the principles and spirit of the game. To protect these principles, we feel it is in the best interest of the game that, moving forward, we employ the following approach:

Laws of the Game

These changes are effective immediately within the Northern Hemisphere.

3.5, which addresses the number of players who are capable of playing in the front row, and how their number affects the total number of players a team may use has been re-written for better clarity with no substantive changes. The part of this section which covers uncontested scrums has been split and now is a separate section (3.6). All the subsequent sections have been re-numbered.

3.12, which covers substituted players rejoining the match (now re-numbered to 3.14) has had one additional condition added. In addition to front row replacement, blood injury replacement and (in Elite games with WR permission) temporary replacement for Head Injury Assessment, a substituted player may be used to replace a player who was injured as a result of Foul Play (as verified by the Match Officials).

Player jerseys must have sleeves that extend at least half way from the point of the shoulder to the elbow.

In the last year there were a couple of Clarifications regarding what happens when there is a score very close to the end of the half or the game. Those have been incorporated into Law [5.7 (g) and (h)]. In essence, if the the conversion kick is taken (or the try awarded and the team chooses not to take the conversion per 9.B.2) before time expires, the next restart will happen even if time expires between the kick and when the players are prepared to restart. And, if a restart is taken under these circumstances with time expired, and the kick is taken incorrectly (e.g. not ten, etc.), the referee will offer the options in Law 13.

6.C, which covers persons coming onto the pitch to treat injured players has been re-written to make distinction between qualified and unqualified medical staff. Sub-sections 2 and 3 have been combined into one.

In the 7s Variations, the time the kicker has to take the conversion after a try is now thirty seconds from the time the try is awarded.

Unfair Play – 10.2. A new provision has been added. “A player must not commit any act that may lead the match officials to consider that that player was subject to foul play or any other type of infringement committed by an opponent.” Penalty Kick.

Section 10.3 (b) – Repeated Infringements. The last sentence has been removed. The referee is no longer constrained in how a second repeat offender is handled.

The definition has been slightly re-written for clarity with regard to “towards the dead ball line.”

The definition has also been augmented to include the Clarifications regarding balls being knocked or ripped out of the ball carrier’s hands by a defender.

This isn’t a Law change, but rather some guidance on the application. The ball in a maul may be moved backwards hand-to-hand. A player is not allowed to move/slide to the back of the maul when that player is in possession of the ball.

19.4 (b), which addresses the ball being knocked-on into touch has been revised to also include thrown-forward into touch (which was already part of 12.1). (Clarification)

The section addressing blocking the throw-in has been re-written so that it applies to all players (not just lineout players). 19.10 (h)

There is now a specific time on the “no delay in forming a scrum”. Free kick after thirty seconds. 20.1 (d)

Front rows coming together has been slightly re-written to require the players be “ear to ear”. 20.1 (f)

Ending the scrum now includes a “use it” provision once the ball is at the last player’s feet and is not moving forward. 20.10 (d)

The scrum half of the team not in possession must now stay out of the pocket.
20.12 (c)

All penalty and free kicks that are awarded close to the goal line are to be given five meters out, regardless of the team (no longer just the attacking team’s penalties).
21.2 (a) 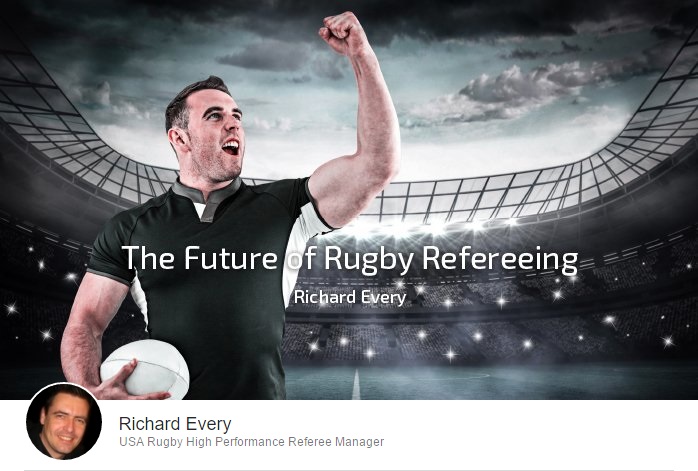 The great thing about rugby is that it is forever changing. We are always growing, making better decisions and discovering new solutions. This is true for players, coaches, referees and administrators. Everyone.

As referees, we are often confronted from all angles. It makes it not so easy to always be confident and motivated. The key is listening. If you know how to listen, you may understand others’ perspectives and not become a victim of their thoughts. It’s all in your attitude. Identify the good bits and add it to your development and goals.

What we are here to talk about today,
is a greater solution for the game.

END_OF_DOCUMENT_TOKEN_TO_BE_REPLACED

Under no circumstances are team coaches allowed to approach the referee at half-time.

If they do, you ask them to convey all questions through their captain, but you absolutely do not discuss anything with the coach at half-time. If the coach persists the referee will EJECT the coach from the grounds. Zero tolerance approach should be applied and if the person refuses to leave the referee should request that team’s captain to assist. Failing compliance the referee may abandon the match.

After reviewing many matches this week, it is great to see that some referees are steadily improving and stepping up.

Refereeing is an ongoing learning process, and here are a few areas that have been identified where we can improve:

All the best for this weekend!

Please be aware of the Protective Equipment and Clothing Guidelines

END_OF_DOCUMENT_TOKEN_TO_BE_REPLACED 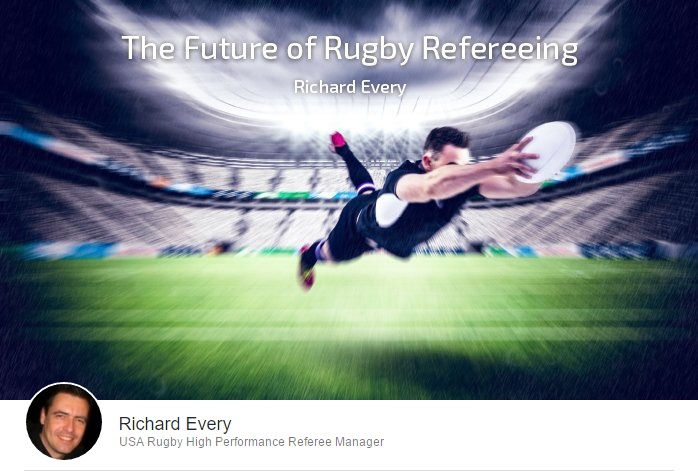 In 1985, I was nineteen when I refereed my first match. It was a men’s division five game in Durban, South Africa. There were ZERO spectators and the penalty count was ZERO. I have yet to replicate that dubious “success”. Today, I am still learning about the intricacies of this amazing game called rugby.

In PART ONE, we shared that a combined TACTICAL and STRATEGICALrefereeing approach can reach the goal to provide teams a level playing field.

This second section can be a bit more challenging. We naturally want to be in control, and to be right. Being in control is NOT the same as controlling the game. Your performance is built on relationships with the game and players. I am sure you believe rugby is the greatest game, so it is worth noting that you get to be part of something you love. It’s an honor to be out there and that attitude can help you focus on the challenge and not the pressure or the concern of making mistakes. It maximizes your ability to succeed, reduces the need to be in control and allows you to integrate STRATEGICAL elements.
END_OF_DOCUMENT_TOKEN_TO_BE_REPLACED